Couple of Italian artists, who have established a partnership that goes beyond the artistic sphere, given that they are married, a de facto couple. Ana Walkiria Almeida born in 1972) Art Designer, alchemist, esoteric, Brazilian, naturalized Italian and Luca Saraceni, blacksmith, alchemists and esoteric, Italian, born in 1972.

In the artistic sphere, the Almeida and Saraceni creations were considered respectful of the level of artistic expression and their works are known both nationally and internationally, a reference point in the art scene for contemporary, abstract culture creations and surreal, use scrap metal as raw material. The sculptors begin their first collection in the year of 2006 entitled "Thoughts and Emotions". In 2008, in two Italian municipalities, the sculptors inaugurated the prestige of seeing, 2 of their works, part of the first collection, as a public monument, the sculptures; "Albero del Desiderio", 6 meters high, in the town square of the city of Paitone in Brescia and "Percezione" in the town square of the city of Nuvolera in Brescia. In 2011 at the "21st Bienno exhibition", the sculptors had the honor of Omaggiati from the Italian municipality of Bienno, as "Scultori Bresciani del Ferro", in the city it is possible to admire one of their public sculptures entitled "Flight of the Soul" , part of the 2nd "Mirror of the Soul" collections. in the same year another 2 of their works participated in an exhibition at the Louvre Carrousel in Paris, the sculpture "Fenice Magic" and "Gitana" are present in the illustrated dictionary of the art of the Louvre artists, a cure by the art critic Sabrina Falzone "Salon Art Shopping 2011". In 2012 they donated to the Academy of Fine Arts of Santa Giulia of Brescia a Sculpture "Complicity" in which it is possible to admire inside the complex. In the same year of 2012, the Sculpture "IL GUARDIANO", part of the 3rd Collection "Arte Ambiente", was donated to the Oncology Hospital of the Laudato SI Foundation, the declaration of authenticity of the work was delivered, executed in the hands of Don Pierino Ferrari, the founder of the hospital, in the presence of Gisella Prandrinilla, leader of the Friends of Raphaël Association, Don Pierino saw the representation of the sentinels of the foundation in the work. In the year of 2013 they created a solo show entitled "L'anima del Rottami", based on the artistic project "CORTILI APERTI" in the city of Paitone in Brescia, an Italian town of intense cultural activity. In the same year of 2013, the sculptors took part in the International Biennial of Palermo inside the precious monumental complex of the city of Monreale "Guglielmo II" - Modern art gallery "Giuseppe Sciortino" Curated and presented by the well known Art Critics Paolo Levi and Vittorio Sgarbi by the art critic Francesco Saverio Russo.

The sculptors Ana Almeida and Luca Saraceni, together, carry out their works blending creativity and technical precision; Almeida; idealizes, drafts, paints and works with the plasma the particular small details of sculpting and finishing, with ideational capacity, and awareness of a solid transmission of his thoughts and emotions, while Saraceni performs with particular technique and constructive precision, for the execution of the works. 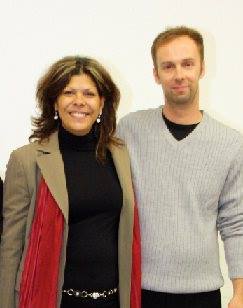